I'm new here and I don't intend to be on here a lot, but I decided to create an account because I needed a second opinion and I didn't know where else to turn.

I should probably explain a few things. I'm a huge Sailor Moon fan (have been since I was a kid) with my favorite season being SuperS. Yes, I know there's a lot of problems with it, but I don't think it's as bad as people make it out to be.

Anyway, that brings up the reason I'm here. While my favorite Sailor Moon pair is Usagi/Mamoru, I also really like Chibiusa x Helios in all incarnations...which brings me to a bit of a problem. I've been starting to wonder recently if their romance is...well...problematic?

I know this issue isn't in the manga, because Chibiusa is over 900 years old. But in the original series, Chibiusa is only 8-9 and (if I remember right) Helios has been around since the Silver Millenium. So would that technically mean their relationship in SuperS is pedophilic?

I only ask because (like most sane people) I don't support pedophilia. But I love their relationship (and have so since I was young) so I'm starting to wonder if that makes me a hypocrite and a bad person? (I have an anxiety in case you couldn't tell.)

I'm guess what I'm trying to ask is this; Is Chibiusa x Helios problematic in SuperS? And if it is, is it okay for me to like it (in a totally G-Rated way)?

I mean, the whole “900 years old” thing never made sense in the manga. For someone that old, she’s pretty dumb.

I always thought it was kinda weird, but I never really questioned it.

Chibiusa is 900 in the anime as well, at least according to the R season memorial.
Sailor Moon Says #BLACKLIVESMATTER #TRANSLIVESMATTER #GOVEGAN #WEARAMASK

Edit: Okay, I just skimmed through the R Season Memorial and yeah she is (apparently) 900 years old, too. I'm kinda shocked that doesn't come up more often. Although TBF, if she was in a May-December Romance with Helios, it probably would've been included on the TvTropes page for Chibiusa (it isn't).

So yeah, I guess that answers my question.

She has the maturity of a child and even gets taller over the course of the old anime. This "900 years old" concept just doesn't work in the story, even though Naoko was the one who created it.
Likes: ChibiNehellenia and Sailor Starlight

I've always been accepting of it, though I am curious as to how it works. If Chibiusa has the body and mentality of a child does that mean she got held back, or has she just been repeating the same grade over and over?

It's one of those things that doesn't make much sense but makes for great story fodder (at least for me).

Iusaka said:
If Chibiusa has the body and mentality of a child does that mean she got held back, or has she just been repeating the same grade over and over?
Click to expand...
It would definitely explain how she actually fell for Wiseman‘s nonsense and became Black Lady.

Oh yeah, it would.

She does mention something about being held back forever in elementary in the R Season Memorial, so I guess it's canon?

I sure the guy got the book thrown at him!

Back to the topic at hand, though thank you. I admit, I get anxious very easy and while I know a lot about this franchise, I'm not an expert. So I appreciate all you giving me peace of mind on this subject.
Likes: FloraKiraraHime 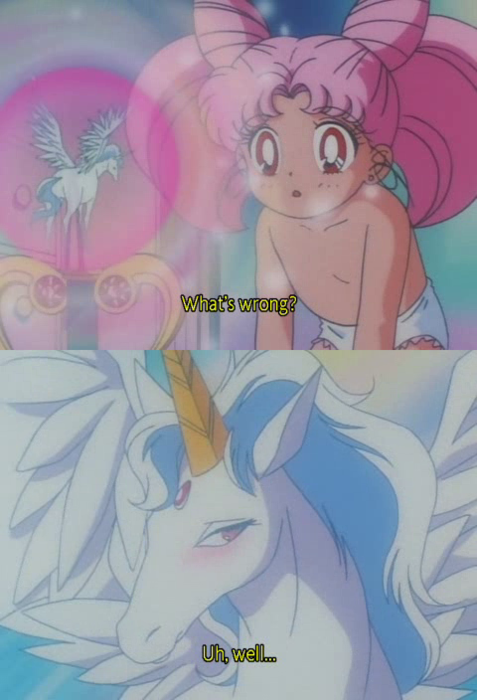