A couple of years ago I posted briefly about Moon Girl, a late forties superhero with some notable similarities to Sailor Moon. After taking a closer look at the series, I decided to put together a brief article detailing all of the similarities between the two, some of which I hadn't picked up on before:

Fighting Evil with Moonlight: A Look at Sailor Moon and Her American Ancestor

Moon Girl herself was both preceded and briefly outlasted by Mysta of the Moon, whose adventures were serialized across 28 issues of Planet Comics between 1945 and 1949. Apart from some telepathic powers, the two have little in common, but they are both in the public domain, so it would be neat to see Toei do a crossover with them and Sailor Moon. Actually, with a few alterations, Mysta of the Moon could easily work as the story of Sailor Cosmos in the aftermath of the Sailor Wars...

Anyway, it may hearten some of you to know that Moon Girl and Mysta of the Moon are every bit as inconsistent as Sailor Moon. I guess there's just something about lunar-themed comic book heroines that results in consistency issues

Likes: The Blizzard Prince, Guardian Princess Nadia, Starlight and 2 others

This really is a good write-up. I do find it interesting that despite both heroines being in different genres and from different time periods, that they have this many similarities, way more than the often cited Wonder Woman/Sailor Moon comparisons. Some of this are due to common tropes, but there is a lot about the superhero aspects of Sailor Moon that harkens back to the Golden Age of comic books. Back then, it seemed more like "things happened" rather than attempting to create complicated never-ending story arcs that led to continuity lockout.

And of course lunar-themed heroines tend to suffer from consistency issues. The moon is the symbol of inconstancy.
Princess Nadia - Code Name: Marle
Likes: Starlight and MementoNepenthe

It's definitely extremely unlikely that Naoko has ever even heard of Moon Girl, let alone that she would have or could have read the series before creating Sailor Moon, but the two properties really have so many things in common... Proof of a collective creative consciousness?
Sailor Moon Says #BLACKLIVESMATTER #TRANSLIVESMATTER #GOVEGAN #WEARAMASK

That's one way to look at it, especially since the framing and arrangement of elements in the panels are similar. Another possibility is that there really are only so many variations of a story to tell. The big difference is how the stories are told.

And, of course, many successful manga creators draw heavy inspiration from non-Japanese cultures as Sailor Moon did. If two creators are reaching from similar sources (classic myths and legends) then there will undeniably be similarities.

I picked up on another metaseries co-incidence just from your analysis. I know the focus was on Sailor Moon/Usagi/Princess Serenity, but the Moonstone having to be recharged by moonlight also reminds me of Sailor V's compact having to be charged by moonlight. Given what is commonly known about Sailor Moon's production history, it only adds more fuel to the fire of the collective creative consciousness.
Princess Nadia - Code Name: Marle
Likes: MementoNepenthe and Starlight

I didn't include them in the article because I didn't know how to work them in easily, but:

There's a character who looks almost like a Sailor Scout: (Look at the tiara/headband, the shape of her collar, the skirt, the boots, how the top seems to have shoulder rolls...)

And in the third issue, there's a story where an evil vizier with hypnotic powers attempts to overthrow the Queen and take over the Moon (Mountain) Kingdom, not unlike Death Phantom/Prince Demand/Metallia.
Sailor Moon Says #BLACKLIVESMATTER #TRANSLIVESMATTER #GOVEGAN #WEARAMASK

Maybe the two authors are consciously/subconsciously influenced by the same real story - they might be reincarnations from certain persons in that story.

I'm so used to looking at the Materials Collection version (which doesn't include this information), that I forgot that Sailor Moon's prototype design gives her associated gemstone as "Moonstone or Pearl." 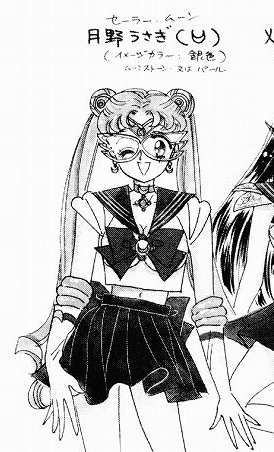 (Okay, sure, those are the standard June birthstones, but I'm gonna take it as further proof that Naoko ripped off Moon Girl