The earliest known sketch of Sailor Saturn, dated November 1993, shows her brooch as being shaped like the planet Saturn, a somewhat cutesy idea.

Naoko evidently found the idea a little too cutesy for the Soldier of Destruction, and quickly simplified it to match the plain brooch design utilized by the other (non-Moon) Sailors, as shown in the Materials Collection. (Saturn's image color was also changed at this stage from yellow ocher to purple.) 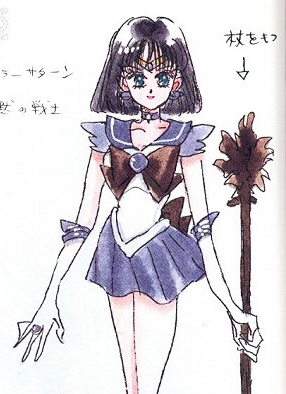 But in the final product, Saturn's brooch design ended up being a rather ornate crystal, unlike any other brooch worn by any other character in the series. 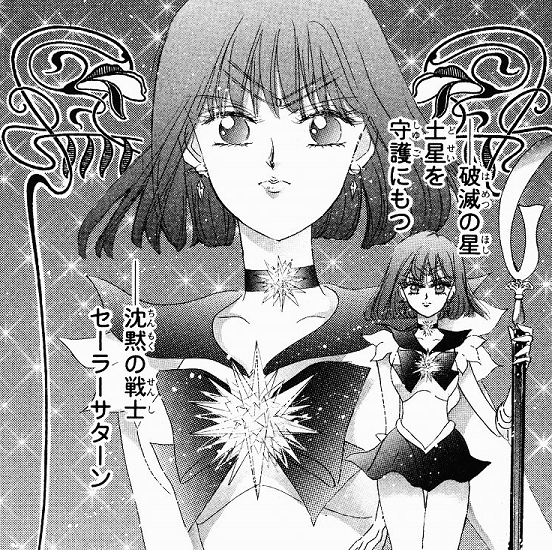 Is it possible that the Heart Crystals were Naoko's idea? That she had intended to include that concept in the manga at some stage, but ended up going in a different direction, with Saturn's brooch being a vestigial holdout? Or is her brooch meant to be her Sailor Crystal, suggesting Naoko may have intended to introduce that concept a little earlier than what ended up happening? Is it meant to be some sort of counterpart to the Taioron Crystal?

She is not like any other senshi, so I like the fact that her brooch looks different.
Likes: HeartWarrior, Crystal Moon and Sailor Starlight

It seems just an aesthetic choice to me. She wanted something that would make Saturn stand out from the rest of the Sailor Soldiers; something befitting her unique role and power. Her brooch may be beautiful, but it also signifies something dangerous. It doesn't have a serene design. It's intricate and busy. It makes you feel a bit uneasy when you look at it. It looks like something that was formed out of the collision between two other crystalized bodies. I think it represents the beauty of rebirth that follows destruction. It, like Sailor Saturn herself, contains both beauty and devastation. Perhaps that's what Naoko was trying to convey. I don't believe it has (or used to have) any other storytelling significance.
Last edited: Oct 12, 2020

I think it represents the chaos Sailor Saturn brings as opposed to Sailor Moon, whose Crystal is secure in her compact. Even when out, the Crystal itself is perfect with no defect. However, Saturn's broicg looks like a chaotic Crystal formation. Lol.

I was always shocked that given Sailor Saturn's rather unique and powerful role of the Outers that she wouldn't be their leader in the same way that Sailor Venus is for the Inners. However most people and the manga seems to point that Sailor Uranus is the leader of the Outers.
.

MariaTenebre said:
I was always shocked that given Sailor Saturn's rather unique and powerful role of the Outers that she wouldn't be their leader in the same way that Sailor Venus is for the Inners. However most people and the manga seems to point that Sailor Uranus is the leader of the Outers.
Click to expand...
I think, traditionally in the Silver Millennium, Saturn was closer to being the three of them's child rather than anything else, hence why she wasn't the leader. It's only with their combined power that she appears, so she's a product of theirs, not their leader.

That being said, she does kind of seem like their leader once she's reborn as Saturn for the third time. She's the one that shows disaster appearing and urges them on. Gives them power, too. Even the thing of her running off near the end of the Dream arc.

Anyway, her brooch doesn't actually strike me as chaotic. It's too symmetrical. Crystals can grow very unevenly and erratically so I feel like hers would be more misshapen in that case.

Maybe Takeuchi drew it that way once she switched from that odd staff to her scythe. The shape on that is a bit reminiscent of her final brooch.

Saturn is to the Outers what Moon is to the Inners IMO. Like foenyanko said, she's not so much their leader as she is the one they guard.

It was pointed out to me that Naoko refers to the heart crystals as "talismans" in the Materials Collection, so maybe Saturn's brooch is meant to represent the union of the talismans' awakening of her?
Sailor Moon Says #BLACKLIVESMATTER #TRANSLIVESMATTER #GOVEGAN #WEARAMASK

Sailor Starlight said:
It seems just an aesthetic choice to me. She wanted something that would make Saturn stand out from the rest of the Sailor Soldiers;
Click to expand...
Definitely the same reason why Sailor Pluto looked different from the rest with her rod, keys, lack of stripes on her Sailor Collar, shoulder pads (90s anime since Mercury had them)
Likes: Stari Guestie 39

I never really saw Uranus as the leader. I always assumed she was just the most aggressive and liked to take charge like Jupiter.

I dont even think they have a leader since they all have very different roles compared to the Inners.

I havent read the manga in a long time and I always was kinda in the air about the classification because Pluto has been guarding the Space-Time Door for a long time and really never gets into any heavy battles, and neither does Saturn as far as protecting from outside threats.

I still think Saturn's brooch represents something. At least for the sake of it being clear quartz which represents a stone associated with the planet Saturn. I wish there was more information about such things as I've become interested in the little details of their outfits now. I guess it could have asthetic like Mars' pendant and Jupiter's belt (two items I wish they kept).

I wish her brooch to be some extremely powerful & destructive ultimate weapon like the Silver Crystal, like tearing the spacetime fabric apart or something like that, leading to an exponentially faster-than-light collapse of the entire universe.

MementoNepenthe said:
Saturn is to the Outers what Moon is to the Inners IMO. Like foenyanko said, she's not so much their leader as she is the one they guard.

It was pointed out to me that Naoko refers to the heart crystals as "talismans" in the Materials Collection, so maybe Saturn's brooch is meant to represent the union of the talismans' awakening of her?
Click to expand...
I would have to say that I disagree with you on that MementoNepenthe. I do not think that Sailor Saturn is the Outer's equivalent of Sailor Moon. Rather she is just one of the 4 Outer Senshi. Really we have Four Inner and Four Outer Senshi that Guard Sailor Moon. The reason I say this is because Sailor Saturn is portrayed while being exceedingly powerful as just another Guardian Senshi of Sailor Moon and not say a Princess in her own right like Sailor Moon nor is her Crystal The Saturn Crystal a special Crystal or on the same level as say Sailor Moon's Silver Crystal, Tuxedo Mask's Golden Crystal or even say Sailor Galaxia's Saphir Crystal. Which with Sailor Kakyuu while her Crystal was never named ( I head canon it being called the Osmathus Crystal but that is just me) it was seemed to be portrayed on that sort of high royalty level as the other three I mentioned. Where as Sailor Saturn was never given that kind of leve. At best she was depicted as a super powerful Outer Senshi that was exceptional in a similar way that Sailor Venus was exceptional to the Inners. Now of course it was never revealed who was the leader of the Outers. I believe that Sabrblade theorized that in the manga that Sailor Uranus was the leader because of when the two groups talked it was typically Sailor Venus who spoke for the Inners and Sailor Uranus wh spoke for the Outers even when Sailor Saturn was present. Again I have nothing to go on but that tidbit but it is interesting.
.
You must log in or register to reply here.
Share: Facebook Twitter Reddit Pinterest Tumblr WhatsApp Email Link