The Early Days of Sailor Moon

Let's not also forget these pages which depict what could have been a team Sailor V anime. I would love it if MementoNepenthe or someone else knowledgeable give us a full translation.

The first page is just a sales pitch for Sailor V. It says something like:


Girls are leading the era right now. Both boys and adults are jumping on things that girls noticed first. The comics industry is also being supported​
by enthusiastic girls. . . . With that as the backdrop, the transforming pretty girl action series "Codename: Sailor V" enters the scene.​
​
In the rushing 90's, pretty girls in sailor uniforms are making a huge splash with boys and adults. Indeed, the birth of the next era's new hero is exactly what's in demand now. We plan to make her arrive as soon as possible!​
​
The character design page... If I could read her handwriting I'd try translating it, but....

For anyone interested, I translated the first ad (the one featuring just Usagi in her school uniform):

正義の戦士巻頭カラーで華麗に登場!!
The Soldier of Justice Makes Her Splendid Debut!!
First Page in Color

("End of the Century Super Action" sounds so funny to me. I wonder if the phrase "Super Idol" means that Usagi was supposed to be an idol, fulfilling Minako's dreams a bit, or if that just means they thought the series was going to become really popular?)
#BLACKLIVESMATTER

If Usagi was initially meant to become Sailor V in the spin-off...what happened to Minako? Part of me wonders if it was only going to be a team of four like in the original proposal with Usagi taking Minako’s place. But what’s even weirder is that Usagi’s name is clearly tied to the moon, and yet she still transforms into Sailor Venus?

I’m also curious about Artemis. In the original proposal, there was going to be a fifth girl who was a princess named Artemis. Was she initially Artemis’ human form and Artemis was originally supposed to be female?

I wish someone could sit down with Naoko and ask her about all of this.
Likes: FloraKiraraHime, redneonglow and MementoNepenthe

Having watched some of TOEI's magical girl shows from the late-1980s (Magical Chinese Girl Pai Pai! Magical Chinese Girl Ipanema! Bishoujo Kamen Poitrine), I think that Usagi simply would replace Minako... or they'd work together, but Artemis likely would not let them reveal their identities to each other.
Likes: Sailor Starlight 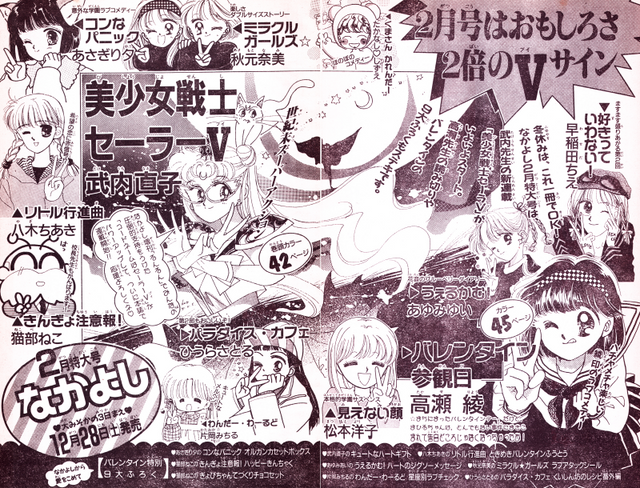 Looking at the two-page spread ad from the January 1991 issue, I noticed the tagline in the upper right hand corner says:


2月号はおもしろさ​
The February issue is gonna be interesting​
​
2倍のVサイン​
Two Times the V Sign​
We can see that all of the characters are making the V-sign. The speech bubble text is the same as from the earlier ad. Elsewhere on the page is text saying "Takeuchi-sensei's new series is finally starting."

Anyway... With all those V-signs, it definitely feels like they're making a big deal about Sailor V becoming a series, which really does make one wonder why Naoko replaced Minako with Usagi, and then later changed the series from Sailor V to Sailor Moon.

But it's that "Two Times the V Sign" tagline that intrigues me. Was that just some kind of marketing nonsense? (It's not like the February issue was a "V-sign" themed issue. Sailor Moon makes the V-sign on the front cover, but I didn't notice any other characters doing V-signs throughout the issue.) Or was it a clue as to what the series would involve? We can already see Usagi was going to have at least 2 (if not 3) Sailor V uniforms... Maybe there would be multiple "pretty soldiers" using the Sailor V codename? Kind of like what they're doing with Batman in the comics right now?

Someone needs to ask Naoko about this if/when she comes to America.
#BLACKLIVESMATTER

^ I also wonder whether that relatively rushy & substantial change is entirely her idea or even her idea at all.

Did a bit more sleuthing.

This poster, which was one of the giveaways for the January 1992 issue of Nakayoshi, is dated November 5, 1991 - the same date as that character description page. So at that point Naoko either seriously intended for Usagi to carry a gun, or she really had no idea what she wanted to do story-wise.

The next earliest dated picture I could find was this one (the bottom one), which was used as a telephone card design for the February 1992 issue of Nakayoshi. Naoko captioned the picture by writing, "I drew this before the serial, when I was still wavering on the costume. The face is also different." As we can see, Usagi here looks like Sailor Moon, only with silver hair. She looks far different than she does in all the promo art in the January issue. But look at the date: November 16, 1991.

November 5, 1991 ---> Naoko is developing her "powered up" version of Codename: Sailor V under the title Pretty Soldier Sailor V, starring a potentially gun-wielding Usagi as the title character instead of Minako.

My guess is the deadline for last minute changes had already passed by the 16th, so it was too late to update the ads and interview with the new title.
#BLACKLIVESMATTER

^ Note that there's also a scene of Usagi wielding a gun in PGSM, albeit it's only in Ami's dream, not IRL. lol

MementoNepenthe said:
So at that point Naoko either seriously intended for Usagi to carry a gun, or she really had no idea what she wanted to do story-wise.
Click to expand...
I don't think she ever planned on having Sailor Moon carry a gun. She probably saw a pretty girl holding a gun in a magazine or something and thought it was cool so she recreated the pose for her illustration.

Another weird thing is there's an ad in the February 1992 issue for some prize giveaway thing. The top prize is a Super Famicon with a copy of Super Mario World. The prize is labeled the "Usagi-chan Prize" but the picture used is of Minako! So it seems from the very beginning this franchise wasn't treated with the greatest of care.

ETA: Can anyone help me figure out what 期待度二重丸!! means? It's written on the telephone card (along with the "End of the Century Super Action!!" tagline) and Google etc. aren't being terribly helpful. It seems to have the word for double in it, so I wonder if it might somehow relate to the "Two Times the V Sign" tagline discussed above.
Last edited: Feb 18, 2019
#BLACKLIVESMATTER

Rika-Chicchi said:
^ Note that there's also a scene of Usagi wielding a gun in PGSM, albeit it's only in Ami's dream, not IRL. lol
Click to expand...
I remember that! Wasn't that from Act 5?

From the February 1992 issue's table of contents: 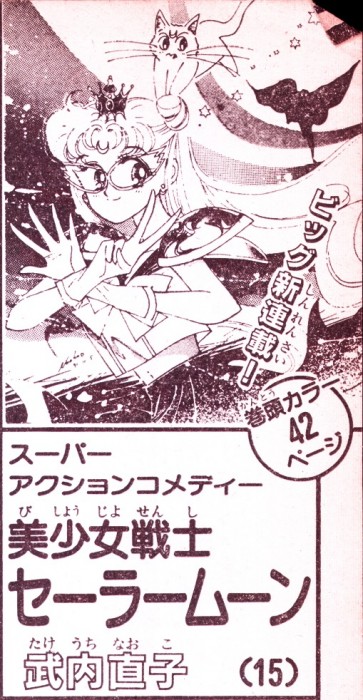 I hadn't noticed this from the two-page spread version of the picture above, but it's also dated November 5, 1991. Either that was a very productive day for Naoko, or it was just the day she finished and dated a bunch of old art work, and thus might not be all that helpful in terms of constructing a timeline.

I also find it interesting that the series is described as a "Super Action Comedy," though I suppose that's apt for Act 1 given the more serious dramatic parts don't come until later.
#BLACKLIVESMATTER

I guess we know where Crystal got its inspiration from.

1. Decided to rename this thread to expand the scope of conversation a bit.

2. Can anyone translate the left-hand four-panel comic from the Sailor Moon Cutie Book? (I wonder how many more four-panel comics are out there, uncollected, that we haven't seen before?)
#BLACKLIVESMATTER

MementoNepenthe said:
2. Can anyone translate the left-hand four-panel comic from the Sailor Moon Cutie Book? (I wonder how many more four-panel comics are out there, uncollected, that we haven't seen before?)
Click to expand...
Moon: Let's do this, Tuxedo Mask!
Tuxedo: Hahaha, you think you can beat me?
Tuxedo: Oh! Wait a moment! *beep! beep!*
Likes: Sailor Starlight and MementoNepenthe