The Early Days of Sailor Moon

Throughout the run of the first four arcs in Nakayoshi, Sailor Moon was always billed as "Bishoujo Senshi Sailor Moon" and was followed by a news page called the "Sailor Moon Information Bureau."

When the Dream arc ended, the final page had the usual "To be continued" message at the bottom, but there was another message along the side of the page:


ご愛読ありがとう!!​
第四部, ついに完結。​
来月号からはじまる,新シリーズをおたのしみに!​
​
Thank you for reading!​
Part 4, finally completed.​
Starting with next month's issue, please enjoy the new series!​
Rather than a new "arc," Stars is referred to as a new "series." 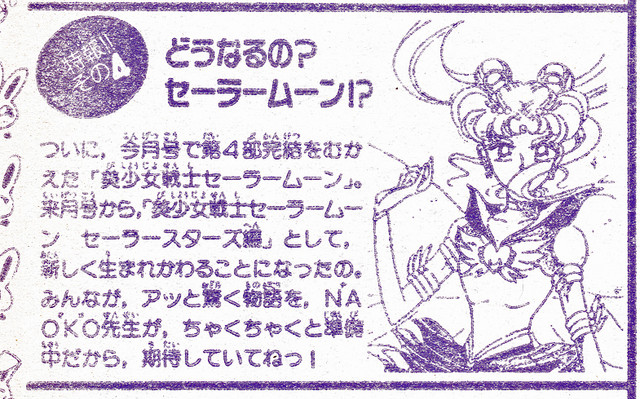 It's hard to make out, but the announcement in that issue's Information Bureau seems to say Sailor Moon is being "born anew" as "Bishoujo Senshi Sailor Moon Sailor Stars," though the word "arc" ("hen") is used.

Given this, I wonder whether "Sailor Stars" was really envisioned as a fifth arc or as a spin-off. Certainly given the way the "Sailor Stars" 'subtitle' overshadowed the "Sailor Moon" part of the name, and how the anime used a different theme song and slightly different art style, it feels like the latter would be the case, as has often been rumored.
Sailor Moon Says #BLACKLIVESMATTER #TRANSLIVESMATTER #GOVEGAN #WEARAMASK

^ My speculation is that manga/anime Stars wasn't meant to be just a spin-off, but also a separate whole new series of the equal status & a similar length as the original series. But as it turned out, it got cut short for some reasons (unsatisfactory ratings? Takeuchi being unable to continue working on it due to stress or w/e causes?).

Just my speculation, tho.

I can see that. It would explain why so many new Sailors and planets were mentioned without being introduced "in person," as if setting up the next arc where we'd get to meet them. But probably Naoko was just ready to move on, and the anime probably didn't live up to Toei's expectations (thus why there was no season six).
Sailor Moon Says #BLACKLIVESMATTER #TRANSLIVESMATTER #GOVEGAN #WEARAMASK

There was a huge rating declined in Sailor Stars (according to Hitoshi Doi the show went from averaging about 11 percent in the ratings to 5 percent in Sailor Stars) so doesn’t surprise me Toei decided to end it there.

Frenchfries&AChocolateMalt said:
There was a huge rating declined in Sailor Stars (according to Hitoshi Doi the show went from averaging about 11 percent in the ratings to 5 percent in Sailor Stars) so doesn’t surprise me Toei decided to end it there.
Click to expand...
And Takeuchi thanked them for that, as she'd looong wanna quit if not for the anime.

Rika-Chicchi said:
And Takeuchi thanked them for that, as she'd looong wanna quit if not for the anime.

Click to expand...
This would have been soooo good!

onesurvive said:
It's like the woman doesn't like money or something haha
Click to expand...
Perhaps at the time she thought she'd already got enough money for all her intense work pressure throughout the past several years. lol

MementoNepenthe said:
Certainly given the way the "Sailor Stars" 'subtitle' overshadowed the "Sailor Moon" part of the name, and how the anime used a different theme song and slightly different art style, it feels like the latter would be the case, as has often been rumored.
Click to expand...
And the fact Toei licenses Sailor Stars separately from seasons 1-4.

Rika-Chicchi said:
It reminds me of a very rare condition that the patient never enters into puberty, w/ the accompanying serious, lifelong psychological consequences.
Click to expand...
I entered puberty...but I had such a baby face that I was mistaken for 15 for the past 13 years. I don't think I could endure centuries looking like I belong in freshman year of high school.

It's bad enough people suffer worse conditions like the above mentioned with psychological issues. I have my own psych issues from more than just the consequences of being physically stunted.

The only reassuring thing I was told by a doctor is I may live to 150 (I'm in my early 30s), but I want to meet an astromer and he's in his 60s and I want to discuss possible names for the Trappist-1 planets. One set of possible names would be the 7 Lucky Gods of Japan.

Still, to spend the 9/10ths of your life trapped in a child's body? I wouldn't stand for it.
J

Honestly, 900 years old while still being a child felt like it was "Interview with a Vampire" levels of disturbing to me for some reason.
Likes: Starlight and I_Am_The_Cauldron

Take this with a grain of salt, but the Japanese Wikipedia page for Sailor V states that the OVA was planned as a four-part release. No source is given, so of course it could just be someone making stuff up, but maybe that was one of the details given in the September 95 issue of RunRun? I really hope a copy surfaces soon so we can know the truth!
Sailor Moon Says #BLACKLIVESMATTER #TRANSLIVESMATTER #GOVEGAN #WEARAMASK

MementoNepenthe said:
Has anyone got a copy or scans of the Japanese edition of the fourth volume of the shinsoban? I'm curious about this comic:

Specifically, I want to know if Naoko actually said "lesbians." MissDream is known to take...liberties with their translations, so I'm curious as to whether or not Naoko actually described them as such. Thanks in advance!
Click to expand...
here
Likes: Starlight and MementoNepenthe

Thanks! It seems that MissDream's translation was pretty accurate for once

julayla said:
Honestly, 900 years old while still being a child felt like it was "Interview with a Vampire" levels of disturbing to me for some reason.
Click to expand...
Yeah the manga is a little silly with that.

Click to expand...
Maybe because of the shrinking ratings of SuperS and Stars and the box office flop of the SuperS movie?
Likes: MementoNepenthe

Osabu sat down for an interview with Natalie.mu yesterday to discuss the history of Sailor Moon. Tuxedo Unmasked has translated the first part of it and will be translating the rest shortly.


Hearing that the original plan was to get 20 episodes of solo Usagi adventures is the most fascinating new tidbit to me. I feel like that would have dragged A LOT, so I'm glad they introduced Ami and Rei when they did.

ETA: Looking at the rest of the interview...

^ I'd also like Takeuchi herself to be in such longer interviews these days, so as to get a more complete picture of what happened back then, but I guess that's unlikely. *sigh*

I can't quite make out what Osabu is saying here:


3部くらいで先生も描き尽くした感があるとおっしゃっていて、ちびうさの人気もすごくあったので、もしかしたらそのあと、うさぎちゃんは引退気味になってちびうさに世代交代して話が続いていく可能性もあったのかもしれない。でもたぶん最後にうさぎと衛の結婚式で終わるというゴールは最初から先生の中にあったんだと思うんです。そこに連なる、5部のクライマックス的な話はやったほうがいいんじゃないかと僕は思っていて。4部ではまずちびうさメインの話をやって、5部で結婚式をゴールに描くことになった。終盤のコルドロンの話のコンセプトとかは、このシリーズの最初の頃に先生とよく話し合った記憶がありますね。……いや、忘れてて、今思い出しました​
It sounds like after the third arc Naoko was already starting to feel exhausted and they talked about having Usagi retire and continuing the series with Chibiusa as the lead, and maybe other generations of Sailor Moons? Possibly that's why the fourth arc focused so much on Chibiusa? But in the end they decided to end the series with five arcs, and wrote the fifth arc towards the goal of Usagi and Mamoru's wedding, which Osabu believes is how Naoko always wanted to end the series anyway.


"Naoko said she was feeling exhausted from writing/drawing the gloomy third arc. Because of Chibiusa's extreme popularity, perhaps thereafter Usagi could retire, and perhaps there was the possibility that subsequent stories could shift towards or take turns with Chibiusa's generation."​
So yeah, seems like they seriously considered having Chibiusa and her generation take over as the leads, or possibly alternating between an Usagi-led story arc and a Chibiusa-led story arc.
Last edited: Jul 2, 2019
Sailor Moon Says #BLACKLIVESMATTER #TRANSLIVESMATTER #GOVEGAN #WEARAMASK