kevoso96 said:
I perceive Western cartoons as a lot more observant of character races than anime.
Click to expand...
That’s probably because Japanese depictions of other races are extremely problematic. I’d rather the hair/eye/skin color differences be due to artistic license than it be a POC caricature to laugh at
Likes: Guardian Princess Nadia
F

kevoso96 said:
They weren't "Asian" in the anime. Two of the main characters were blonde girls with Japanese names. I would say anime characters don't even have races.
Click to expand...
I what? They had Japanese names. They spoke Japanese. They lived in Japan. Japan is country in Asia. They were Asians.

PurpleWarrior13 said:
I know the script for the animated scenes was leaked online, but there's almost nothing known about the live action portions. I would love to see the finished pilot. I'm sure it's hilariously awful.

Also, I think Bandai created the original American Sailor Moon logo, and all the licensors just happened to use it. Even Studiopolis uses it for their printed recording scripts for the new dub. The new "international" logo isn't nearly as good.
Click to expand...
Could it also be whoever created the trailer just used it after the trailer ended on their own?

I thank god nearly everyday that this “sh&t” was never released. This would have probably erased the Japanese version for the world distribution...
Au nom de la Lune, Je vais te PUNIR !
F

Yamoon said:
I thank god nearly everyday that this “sh&t” was never released. This would have probably erased the Japanese version for the world distribution...
Click to expand...
Eh I bet anything this garbage heap would have been cancelled after 13 episodes and some other company would have picked up the license and dubbed this show.

This thing never had a chance to exist because the idea of spending money to remake the show instead of just dubbing it (or in DiC’s case dub it with some mild digital alterations), is asinine.
Likes: ChibiNehellenia

Tuxedo Kevin said:
They weren't "Asian" in the anime. Two of the main characters were blonde girls with Japanese names. I would say anime characters don't even have races.
Click to expand...
That is nonsense they were Asian specifically Japanese. Anime is known for having wild hair colors and eye colors but the characters were Japanese. They were born in Japan, had Japanese names, spoke Japanese and that was their culture. Usagi and Minako were Japanese girls with blonde hair in the same way Ami was a Japanese and Asian girl with blue hair.
.
Likes: ChibiNehellenia

You could also go with the silly theory that since they are identical-looking reinarnations of Silver Milennium people, their geneology is basically Lunarian, while Mamoru, Helios, Beryl, and the Shitennou are probably from a fallen kingdom in either Antarctica or Greece. And then Chibi-Usa is a combination of those two things.

As far as race in anime, I think there are some cases of non-charicaturized people with dark skin who are supposed to be from foreign countries, though what counts as architecture may vary. For example, Kaolla Suu in Love Hina has dark skin, blonde hair (or sometimes it looks kinda white or greenish, depends on the colorist), a Bindi/Pottu type dot on her forehead, but she's from some madeup kingdom called MolMol that's probably located in a slightly different "magical world" (or so I retroactively infer from the author's next manga in the shared setting). She doesn't have any exaggerated physical traits compared to any of the other characters (though all the characters in Akamatsu's manga are pretty sexualized, but that's a whole other topic and that also applies to Sailor Moon anyways). She does do weird things, but basically everyone in that series acts sort of crazy, and if there was a specific racial subtext I didn't pick up on it. But there's probably much better examples out there, that's just one I know about.

I forget if I already mentioned this, but, I do kind of halfway like the idea of a Sailor Senshi functioning in a wheelchair. Given the way attacks work, I could see them pulling it off, but navigating would be a frequent problem (especially doing so quickly). But since they have futuristic moon technology and stuff like the Mercury Goggle, maybe it could be a ridiculous motorized wheelchair like in the movie Steel or Alien Resurrection?? I doubt they'd go that direction in the Toonmakers/Saban version though, or even think it out very well in terms of plot impact; it probably would've just been awkward.

...unless the Wheelchair was supposed to turn into this. 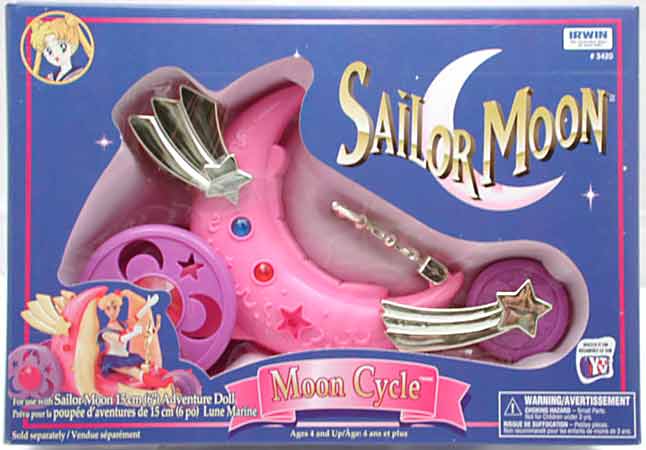 Click to expand...
I used to have this as a kid and never even gave it a second thought haha

I think a pilot would have had the same aesthetic as this:
Likes: Neo King Rose, Umino and Sailor Starlight

Clow said:
I think a pilot would have had the same aesthetic as this:
Click to expand...
Haha, that actually looks cooler than the Saban/Toonmakers trailer. In a really goofy way, of course.

Click to expand...
It depends on the disability and the degree of the technology. We have cybernetic robotic leg replacements in the modern day, but that won't help you if you're paraplegic. But if full body replacement (or at least major spinal and neural replacement) were a thing, that might not be an issue anymore either. It all depends.
Last edited: Jul 25, 2018

Clow said:
I think a pilot would have had the same aesthetic as this:
Click to expand...
I love Super Human Samuari CyberSquad, grew up on that along side power rangers a few years before I discovered the Dic Dub of SM

Have you blamed Chiba today? no??
why not?
Likes: NJ_

But, MAN, that was some impressive detective work and I'm amazed that all the people she reached out to who responded were so cooperative in this. To think that there was a second Sailor Moon-based concept for an American show just floating around in the abyss after all this time that no one ever knew about.

Welp, guess it's time for all the YouTube comments sections to start exploding over how much of a "disgrace" this Team Angel thing would have been to both the REAL Sailor Moon and American TV in general.

LifeGaveMeLemons said:
Zyuranger, the specific Sentai series that became the first season of Power Rangers didn’t exist in 1984. It was most likely Bio Man which also had a pilot made by Saban in the 1980s. The author of this article could have just said Super Sentai
Click to expand...
The article was updated to correct this minor error.
Chase's Eye said:
Sabrblade, don't ever change.
Click to expand...
Neo Moonlight said:
Wow! You sure know your stuff, Sabr!
Click to expand...
Prince Rose said:
thats Sabrblade for ya always in perfect detail
Click to expand...
KawaiiMira said:
I always look forward to your posts!
Click to expand...

Sabrblade said:
But, MAN, that was some impressive detective work and I'm amazed that all the people she reached out to who responded were so cooperative in this. To think that there was a second Sailor Moon-based concept for an American show just floating around in the abyss after all this time that no one ever knew about.
Click to expand...
It's like while one is trying to find the answers, they can't but instead get even more questions during the process. It's understandably frustrating but is actually still a good thing, since we're heading closer to the whole truth.

I was really taken by surprise how the writer of the article managed to find so much information. Let's hope that these leads help uncover the whole story of Saban Moon. No matter how campy or downright ugly it might have been, it is still part of the Sailor Moon history. I consider it to be the equivalent of Dragon Ball: Evolution.

They ditch the girl in the wheel chair!!!

HOW DARE THEY DO THAT!!!

Everything about this looks like the opening of an SNL parody
Likes: MementoNepenthe

I've seen some clips in Pan pizza's video. It looks like a mess of CGI, live action and 2d animation. It can work but the execution was a bit poor.

That pilot better be found.