I'm not a huge collector. It's not that I need to get every single toy ever made or anything like that, but it's nice to have a toy or two here and there and a couple of stickers. It's not like stickers and things like that are expensive, so it's a nice way to show off your SM pride. And toys, expensive or not, are just preference. I mean, I loved playing w/ all sorts of dolls when I was a kid, so I always think of dolls before anything else when I think of SM toys. People who like to role play (like I did since all of my toys were crap hand-me-downs) may also prefer the life-size Cutie Moon Rods, or their SailorMercury henshin wand, or even (as my case is) a Telelia S cell phone. So wazzle, I hope that helps you understand better why people need to collect this stuff. At least that's my take on things.

Heh, the [THE HAPPY PLACE] shirt is missing from your pictures of stuff, Dosei.

Puellizator qui puellas in puellis amat
"Like some cat from Japan, he could lick 'em by smiling"

Kerochan no Miko said:
BRING ON THE KINGDOM OF YURI.
Click to expand...
KUMA SHOCK
S

Mars or Minnesota (I travel a lot)

I got a sailor moon sticker too! I got it from another moony friend, traded it for a bloosom sticker. I know my collection isn't much but I'm very happy with it.

And hopefully when I get back from the convetnion this weekend I'll have something else to add to it. I know it an't much but at one time or another (blasted childhood) I had plenty of sailor moon stuff. I had three sailor moon dolls (moon and mars. I had two mars cuz the first one was sent out with the wrong type of shoes), six sailor scout action figures (moon, mars, mercury, venus, jupiter, and beryl), a sailor moon kite that I got at a local gas station, and a poster that matches the kite. But unfotunatly with moving and stuff I lost everything listed in this paragraph one way or another (The kite I used and it broke in half > >). I don't know how in the world I kept my cresent moon wand since when my baby brother was a toddler he couldn't destroy that thing faster but somehow through it all I got to keep it and it still works, though the emperiam silver crystal is gone and the cresent moon on it needs to be repainted. Im not keeping that nor the transformation brooch for resale value anyway, the brooch had a major problem when some batteries exploded inside of it. The volume doesn't work anymore on it.

Woooow..you have statues? :ohmy: They must've been expensive if they were the huge kinds. I always wanted them because they're so pretty but they're so expensive.

Well, Hikari isn't a Sailor Moon character... Actually, I didn't think about it. The thing might have even been in the laundry.
土星の戦士か同性の戦士? どちかな?!

I feel better than I have been feeling lately, but what I am going through now is not exactly a picnic, either. I am not going to list all of my things, but I want to give you all an idea of my BSSM collection.

I own every book that I listed here:

Never really considered this to be a collection but I guess in time that's what it's become.

I can't posssibly attempt to list such things as stickers, cards, posters and calendars because then I'd have to take pictures of a dozen walls and a mess of stuff. I also did not put any VHS since it's a dead format. The only thing I have on VHS and not in a better format is some French episodes. 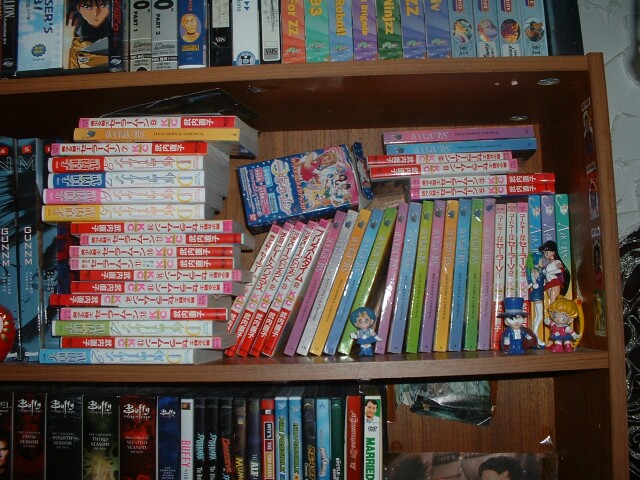 Manga: All 18 Sailor Moon and 3 Sailor V in Japanese & French. The new versions up to 7. Not everything is in this picture since various volumes are scattered around the room. 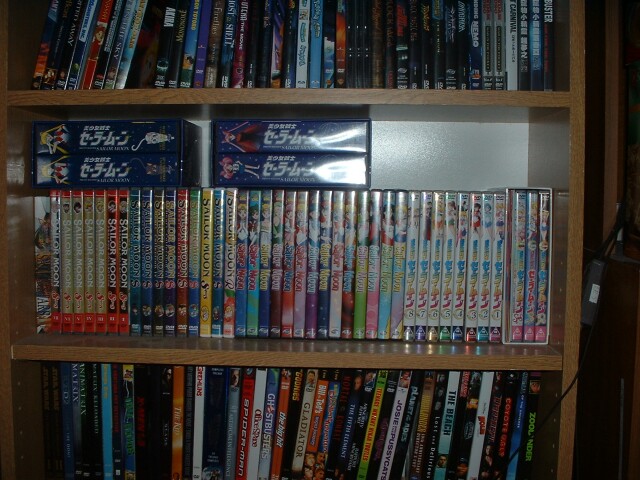 Laser Disc: Season 1, R and S as well as the SuperS special. 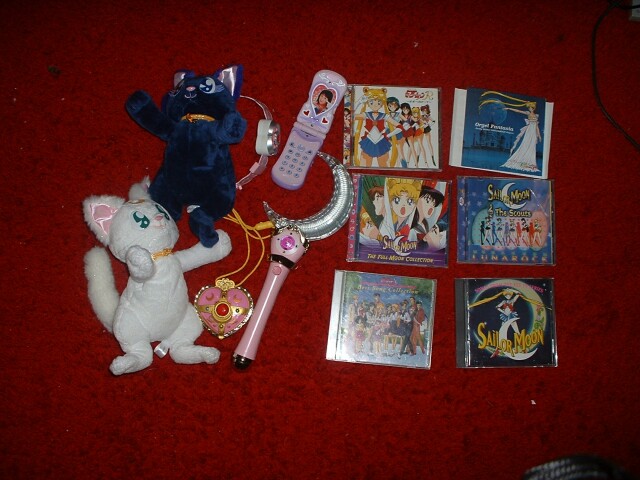 Self explanatory toys and CDs. 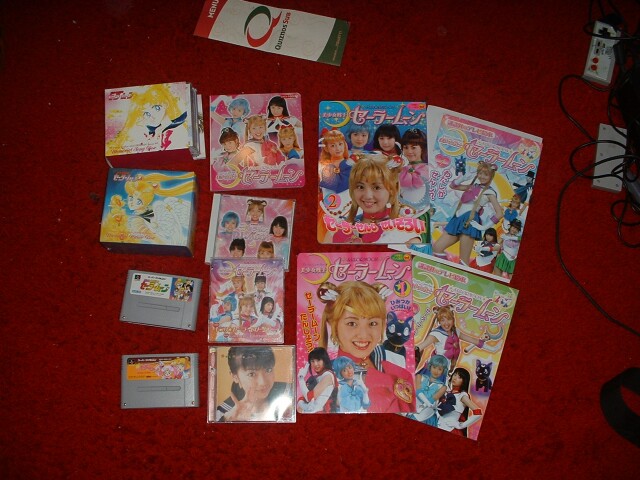 Oh, gee whiz, aDam... I wish I could come over to your place and we could have some sort of "SM jam session".
Unofficial IRC channel: ]#[THE HAPPY PLACE]
A

Now that sounds like an awesome party I'd love to get a piece of.

I wanna come over too!!

Have the urge to grab that Artemis plushie...

hiding in the pants behind you...gotta love retail

^^() My collection is left overs compared to some of you guys!

-Sailor Moon S(2 of the 6,can't remember at the moment the actual numbers)
-First 2 VCR tapes of the same season, dubbed
-all 3 movies dubbed
-stickers
-music jewelry box
-those little mini houses(Jupiter's)
-the 6 inch dolls(Pluto, Mercury, Mars
-12 inch doll(Venus)
-2 taped episodes of the S season from the WB
-trading card game(first season, dubbed)
-most of the manga(missing a few-#1,11,supers1)
-a novel based on the dub

-PGSM(23-25)
-Many images(many are screencaps, then ones I make/draw, then anime and manga images)
-plenty of icons
-a web site and a half

I really want to get PGSM things. :/ But I'm not allowed to order online.

EDIT: ^^() I forgot I made two t-shirts using the screen caps but they're already breaking into those little pieces. I'm afraid to wash it. o.O

ADam, this is forewarning that I have sent ninjas to steal things from you. Yes, the Teletia S is one of those things. Unfortunately for some of us, I'm kidding. Seriously, how CAN you afford all of that? If you ever just want to give anything away, I'll be more than happy to recieve.

I've been working full time since about 4 months before the live action show started. Hehe. Well it's not that I have money to just throw away. This stuff has always been a significant amount of cost to me. But spread out over the past few years it isn't crippling. Everyone has something they waste money on.

And good luck with the phone. I keep it in my coat's breast pocket most of the time so you'll have to send a ninja to fight me.

That all I can remember and see for now I hope I didnt leave anything out.
Two in harmony surpasses one in perfection *blinks* Sweet jesus o_o You people have a lot of stuff. Ummm... Not that I'm one to talk eh heh ^^;;;;;; I'd take a pic or list what I have but I'm at my dorm right now and beyond having a lot of random things I'm missing a lot of stuff that I really have. And I've stopped buying Sailor Moon stuff a lot over the past year or two until PGSM came out and renewed my interests. I threw away any posters I had because posters just are annoying and take up space. Maybe if this is still around when I'm at home I'll be able to post a picture ^^;;;
空の詩人が言いました
私の服は水色キャンバス
星の詩人がいいました
私の髪は金色クレヨン

I tried to take a little pic and the batteries in the camera were dead. I don't have much in the grand scheme of things. Just some pieces I've picked up because I thought they were cool- the latest being the Star Music Box Locket from Season 1.

But you all have really cool toys!

I want the plushies!

Wow I wish I had that much sailor moon stuff, mine pales in comparison.. oh well

A SuperS poster my friend Marie got me for Christmas

my Mam made me get it framed as she won't let me put posters on the walls.

Nine Irwin Dolls, six of which (the dark Blue ones) I found in a specialist toy and model shop called Popcorn. Three I got in (various) Woolworths when Irwin licenced them to Vivid Imaginations over here for a breif period.

One Sailor Pluto keyring and two German tiny figures I got from a comic book/Sci Fi shop called Forbidden Planet (Sailor Mercury and Sailor Venus though you can only see her legs here ><;; Venus is top heavy and never stands up.)

S Movie DVD, Classic & R Boxsets (all region one but my DVD player plays both

so does the family one)

A really stupid Read-and-Learn "STARS" magazine I got just because it was a Sailor Moon Issue, (why on earth else would I buy an educational magazine aimed at four year olds? It even pictures 'Serena' struggeling over the question "You post letters in this...")